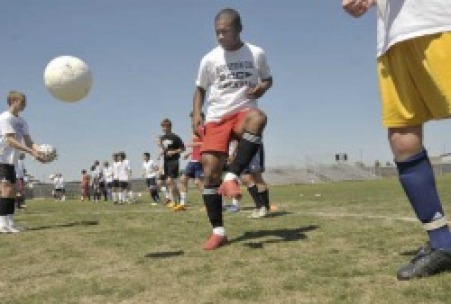 Houston County High-
Richie Wimsatt has started nearly every game of his Houston County soccer career. Head coach Chris McCook didn't start Wimsatt the first couple of games of his freshman year, but it didn't take long for McCook to realize the talent he had on his hands.

And Wimsatt has only gotten better with time. When he's not playing soccer with Houston County or with his club team, the Atlanta Fire, he is working on drills in his back yard. Wimsatt also avoids soda because playing center midfielder, one of the most demanding positions in the game, requires a player to be as healthy as possible. His dedication to the game led to Wimsatt becoming captain this year and running practices during the summer and spring breaks. But with that responsibility comes a burden. He has had to deal with the disappointment of the Bears not winning the GHSA Region 1-AAAAA title for the first time since the 2004 season.

Now, Wimsatt has his eyes on the state tournament and his future, which is playing soccer at Mercer.

QUESTION: How are you able to stay healthy when you play a lot of minutes in one of the most tiring positions in soccer?

ANSWER: It is sort of one of those soccer things. You play every single day. You get used to practicing every single day. I try to touch the ball every single day. Staying in shape isn't so much the issue as just staying healthy. At the same time, it does take a wear on your body. It is tiring, but I don't think it is anything miraculous.

QUESTION: Are there any foods that you stay away from?

ANSWER: No sodas. Absolutely no sodas. You definitely can't drink sodas. And there are some foods you have to stay away from. But I do usually eat whatever I want, but my main thing is staying away from soda. One soda will put you back.

QUESTION: Would you say that this has been your best season?

ANSWER: I think the difference between this season and in the past is that in my mind, it is not about me, it is about this team effort. In seasons before, it has been about me proving myself as an underclassman or me having to prove myself in the midst of other great legends that came through here. But this season, I have a lot more freedom to not necessarily show myself as a good player but to make other players around me better. I think that is an opportunity that is worthwhile. It means more to me to be a mentor and be a leader to people that look up to you. You can only play hard for so long, but if people play hard after you are gone because of you, that means a lot more.

QUESTION: What was it like running practices during the summer and spring breaks?

ANSWER: It is difficult. You find out what you put coaches through once you step into the coach role, especially coaching teenagers. At the same time, we have a great group of guys, and when they come out, they are ready to work. They are willing to work. And they are going to put the hours in, and they are going to put the work in. It is just a joy to see people find that natural passion for soccer that I have. It is great to connect with people and say, "Hey, lets get better together."

QUESTION: Why did you decide to sign with Mercer?

ANSWER: At first, I just wanted to get out. In the beginning of the recruiting process, I stayed away from Mercer. But in the last scheme of things, I realized I had some unfinished business here at home, and I have an opportunity to play and not be so distanced from my parents but at the same time be distanced, which I think is a good feature. Of course, they did offer me quite a bit of money, which of course, is going to sway anyone's decision.

QUESTION: How difficult was it Monday night to find out that Warner Robins beat Colquitt County to win the region title?

ANSWER: It was more difficult the night we lost to them the second time (Warner Robins won 2-1 in penalty kicks April 8). You just get this feeling of failure, this feeling of defeat. When things aren't in your own hands (the Demons had to win two of their final three games to win the region) and you don't have control over the situation, you feel like you failed as a captain. You failed as a leader. You just hope everything works out. I remember texting Coach after the game and said, "Coach, I just feel liked I failed." He sent me a reply and said that everything happens for a reason. After that, I realized that for this to be a successful season, we have to go through plenty of failures. I don't know if that foreshadows success in the future or if that predicts it but either way, I know this is going to push us to the next level. I don't know if winning four (region) championships in a row was a big thing. Me not ever having lost one, that was an emotion that was new to me. It was one of those emotions that was quite painful, but it might be one that I needed to experience.